A man and a woman wanted in connection to a stabbing and assault in Lincoln County were arrested overnight in Alexander County. 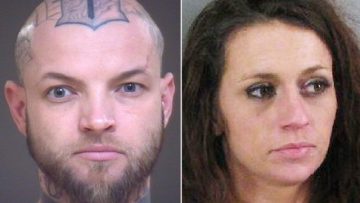 32-year-old Billy Joe Franklin III of Cherryville and 27-year-old Jessica Mae Nations of Gastonia  were arrested after an off duty Iredell County Deputy spotted their vehicle on US 64 near the intersection of Adams Pond Lane. Officers responded and the vehicle was stopped at the intersection of US 64-90 and Liledoun Road. Alexander County Sheriff’s Office Deputies, Taylorsville Police, Iredell County Deputies, and Lincoln County Officers all were on the scene of the arrest.

The Lincoln County Sheriff’s Office says the incident occurred at a convenience store on Confederate Road in Lincolnton. A white male and female entered the store at approximately 11:15 a.m. Wednesday (February 27) and asked to use the telephone. While the woman was on the telephone, the man came around the counter and assaulted the owner with a knife and his fist. The couple left the store but the man returned and assaulted the woman again with a knife and his fist. The victim was taken to a hospital, no condition report is available.