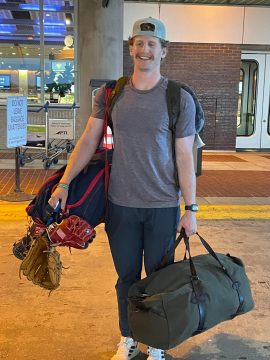 Zach Moves A Step Closer To “The Show”

Taylorsville’s Zach Brzykcy is a step closer to his dream of being a Major League pitcher.

Brzykcy has been promoted by the Washington Nationals to AA Harrisburg Pennsylvania.

The soon to be 23-year old has been spot-on this spring at High-A Wilmington,Delaware. In 17 appearances he went 6-1 with 4 saves and and earned run average of 1.66.

Brzykcy was the Northwestern Conference Pitcher of the Year in 2017 for Alexander Central. He attended Virginia Tech University and was the bullpen closer for the Hokies before signing as a free agent with the Washington Nationals.