A man is in custody after a high speed chase that began on Saturday in Taylorsville and ended with a crash in Lenoir. 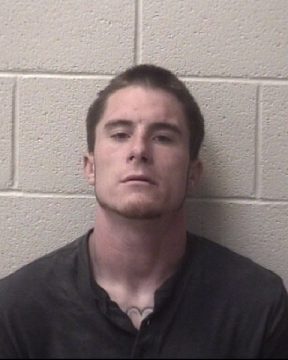 Adam Christoper Burgin, age 28 of Lenoir was spotted shoplifting at the the Taylorsville WalMart according to Taylorsville Police. He was sighted carrying a backpack out of the store containing stolen items. Captain Doug Bowman of the Taylorsville Police Department spotted the suspect in a vehicle and activated his blue lights and siren. The suspect fled at a high rate of speed onto Highway 64-90, heading west. Bowman pursued with speeds reaching over 100 miles per hour. Deputies from the Alexander County Sheriff’s Office joined in the chase which continued into Caldwell County. The suspect refused to stop and entered the city of Lenoir where he crashed in a traffic circle. The suspect fled on foot but was quickly captured by Captain Bowman.

Burgin is charged with felony speeding to elude arrest, careless and reckless driving, speeding, stop sign violation, stop light violation, driving while license revoked, and resisting and obstructing a officer. He also is facing outstanding warrants from Burke County and has a series of charges pending in Caldwell and Buncombe County County as well. Burgin was placed in the Alexander County Detention Center under a secured bond of $50,000. He will appear in court today in Taylorsville.