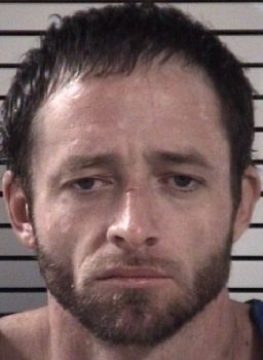 A Taylorsville man is facing felony charges following his arrest on November 24th. 36-year-old Gene Lee Greer, Jr. was arrested by the Iredell County Sheriff’s Office. He’s charged with felony counts of larceny of a firearm, breaking and entering of a motor vehicle, and possession of a firearm by a convicted felon.

Iredell County Deputies responded to a location off Lackey Farm Road in Stony Point, in reference to a breaking and entering, and larceny of a firearm from a motor vehicle. Greer Jr. ran through a nearby field with the stolen fiream. A perimeter was established in the area by deputies. A K-9 unit and the sheriff’s office drone was dispatched to the scene in an attempt to locate the armed suspect. A short time later, the suspect was taken into custody in Alexander County.

Bond for Greer was set at $200,000 secured. His next District Court date is December 14.
Greer has an extensive criminal history including multiple counts of larceny, forgery, obtaining property by false pretense, and breaking breaking and entering. Currently he is awaiting trial in Alexander County on numerous counts including felony possession of methamphetamine and cocaine charges.