Wittenburg Elementary School kindergarten teacher Brian Smith has been nominated for the 2018-2019 national LifeChanger of the Year award. 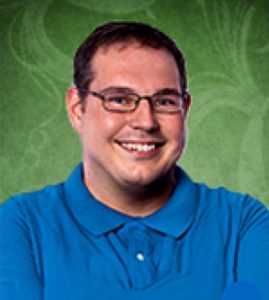 Smith was nominated by his spouse, Elizabeth Smith, for going above and beyond for his students. He truly believes in creating long-lasting connections with his students, and he shows up to support them outside of the classroom. Smith attends dance recitals, sporting events, and birthday parties for his students. He even goes out of his way to perform home visits within the first month of school in order to get to know his students and their families better.
Smith demonstrates outstanding leadership within his district and beyond. He serves on multiple boards at the local and state levels, all of which provide him with an avenue to advocate for students with learning disabilities, who are typically disenfranchised from education. He is especially interested in advocacy and learning more about dyslexia and autism.
“All of these examples are proof that Brian Smith changes lives, but what makes him a true LifeChanger is that he gets up every day with a can-do spirit and goes to work with genuine happiness. He knows that he is making a difference, and that is all he wants to do,” said Mrs. Smith.
Sponsored by the National Life Group Foundation, LifeChanger of the Year recognizes and rewards the very best K-12 educators and school district employees across the United States who are making a difference in the lives of students by exemplifying excellence, positive influence and leadership.
Each school year, LifeChanger of the Year receives hundreds of nominations from all 50 states and the District of Columbia. Seventeen individual LifeChanger of the Year awards will be given during the 2018-2019 school year.
• (1) Grand Prize Winner – will receive $10,000 to be shared with their school/district.
• (4) Grand Prize Finalists – will receive $5,000 to be shared with their school/district.
• (10) LifeChanger Award Winners – will receive $3,000 to be shared with their school/district.
• (1) Spirit Award Winner – This award is given to the nominee whose community demonstrates the most support for their nomination. The winner will receive $5,000 to be shared with their school/district.
• (1) Spotlight Award Winner – This award is given to a nominee in a specific discipline each year. For 2018-19, the Spotlight Award will be given to a nominee who works in a counseling role (e.g, guidance counselor, social worker). The winner will receive $5,000 to be shared with their school or district.
Winners are announced via surprise award ceremonies held at their schools. The grand prize finalists will also be honored at a national awards ceremony in April 2019 in Hawaii, where the Grand Prize Winner will be revealed.
Winners are chosen by a selection committee comprised of former winners and education professionals. Nominees must be K-12 teachers or school district employees. To be considered for an award, nominees must:
• Make a positive impact in the lives of students
• Enhance their school or district’s atmosphere, culture and pride
• Demonstrate exemplary leadership at the school and/or district level
• Possess a proven record of professional excellence
• Show commitment to building a nurturing environment that supports learning
• Adhere to the highest moral and ethical standards.
To view Smith’s LifeChanger of the Year nominee profile, visit www.LifeChangeroftheYear.com.