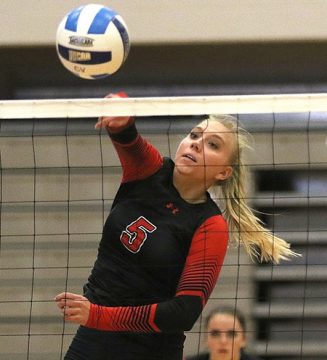 Sage Harrington, a freshman from Taylorsville tallied 41 kills in five matches this past week in 13 sets played, including a season-high 13 against No. 16 Lincoln Land Community College during the Parkland College Halloween Challenge in Champaign, Ill. on Friday.

Harrington currently ranked second on the CVCC volleyball team with 249 kills and 1.99 kills per set and third in total blocks (128) and blocks per set (1.02). She leads the Red Hawks with a 0.372 hitting percentage.