When you take a look at Alexander Central’s 2018 football season, it’s as if they’re two different teams. The Cougars stormed out of the gate, winning their first five games and pounding lumps on their opponents in the process. 40-7 over Burns in the opener, 50-7 against Wilkes Central in week two, they scored 56 at North Lincoln and shut out West Caldwell 69-0 in the conference opener. Confidence was high, victory was expected when coach Butch Carter’s team traveled to Boone to battle Watauga. Thud ! 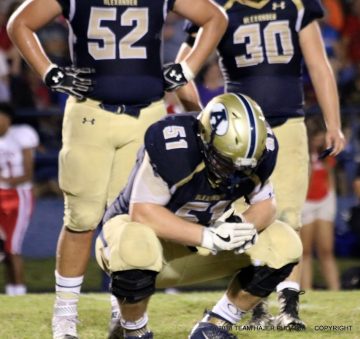 The Blue and Gold fell flat on the artificial turf against Watauga losing 35-0 . They followed it up the next week at home taking a 38-6 spanking against Freedom. Some fans jumped off the bandwagon. Some fans questioned the coaches. A player was dismissed. Some fingers were pointed. Some Changes were made.

After the loss to Freedom, maybe after the loss at Watauga, a new team emerged. The new one was more of a “We” group instead of a “Me” assortment of talent. The only thing left was to win the last four and go 9-2. It would please nobody after a conference title in 2017 but it was the best they could do. They did it. Using the bruising ground game and a defense that was less than hospitable, the Cougars were reborn. Players seemed to be less concerned about how many yards they had gained or how many tackles they made. “We” had replaced “Me”. Same gold helmets, same offense, same defense, but different. “We changed, we put the wheel back on” says Coach Carter.

Tonight the Cougars travel to Asheville Erwin. The Warriors are 9-1, finishing 2nd in the Mountain West Conference to A.C Reynolds. They’re a high octane team averaging 44 points per game. Quarterback Kendrick Weaver has passed for 2,100 yards this season and thrown 30 touchdown passes with just 4 interceptions. Receiver Simeon Thompson has hauled in 22 of those scoring passes. Erwin can run it too, they average 200 yards per game on the ground. “They are impressive, big up front with a lot of skill” say Coach Carter who likens them to a combination of Freedom and Hickory. “We’ve got to put pressure on their quarterback” Carter said this week. “This is a good draw for us, we’re going up the mountain planning to win if we play our game.”

AC will be without starting quarterback Easton Rhoney who suffered a concussion in the win over Hickory last week. Tailback Steven Montgomery is also a scratch tonight. Between the two, that’s over 1,200 yards of offense. Sophomore Lance Justice has taken snaps all week in practice at quarterback and another sophomore Daniel Morgan will move up from junior varsity to replace Montgomery in the running back rotation.

B86 Radio and 860wacb.com will have all the action beginning with the Countdown to Cougar Kick-Off at 6:30.