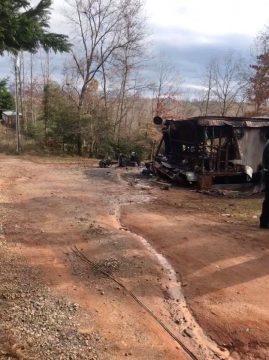 An Eastern Alexander County mobile home was destroyed by fire this morning. Units from Hiddentite, Vashti, and Stony Point responded to the Elliott Brann Mobile Home Park around 11:30am. A structure was engulfed in flames when the first units arrived at the location off Sulpher Springs Road.

County Fire Marshall Russell Greene said that the rental unit was unoccupied at the time of the fire. The two people who live there were at work. The mobile home is a total loss. Greene says the investigation is underway but it appears the fire might have started in the kitchen area. A neighbor noticed the flames and called 911. The Red Cross is assisting the residents.