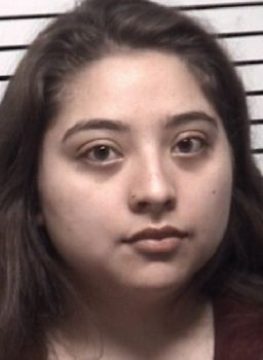 21-year-old Dulce Marie-Ruby Martinez of Statesville is reported to have jumped into the man’s truck and grabbed a handgun which was lying on the center console. After a brief struggle, the male was able to disarm Martinez, and regain possession of the handgun. While attempting to secure the weapon, Martinez fired the weapon, causing damage to the vehicle.

Iredell Sheriff’s Deputies and Iredell EMS arrived on the scene. Martinez gave investigators conflicting information about the incident. She was transported to a hospital for evaluation. Martinez has been charged with felony counts of breaking and entering to a motor vehicle and larceny of a firearm along with misdemeanor counts of assault with a deadly weapon, injury to personal property, and simple assault. Later in an unrelated incident, Martinez was charged with the felony vehicle break-in and firearm theft counts, along with misdemeanor assault with a deadly weapon. Her total bond was set at $10,000.