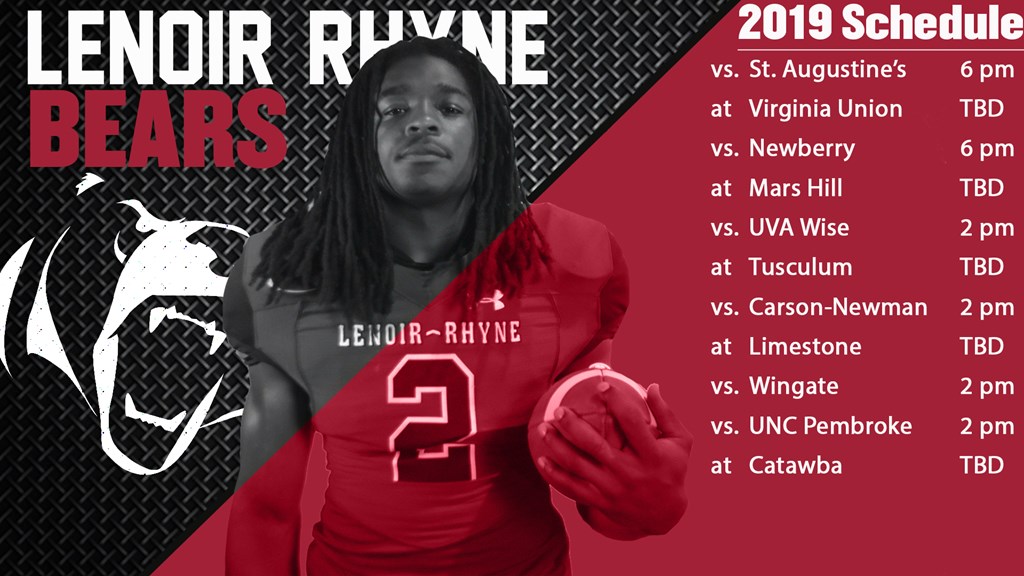 Coming off one of the most successful seasons in program history, the Lenoir-Rhyne Football Team has announced its 2019 schedule for the historic 100th year of LR football. Reigning AFCA National Coach of the Year Drew Cronic and the Bears will kick off the season at home on September 7 when they host St. Augustine’s at 6 p.m. which opens up a season-long “Centennial Celebration” Between the Bricks.

In 2018, Cronic turned the program around in his first season at the helm. After inheriting a 3-win program, Cronic led the largest turnaround in the nation as the Bears went 12-2 and rattled off 12 straight wins. LR went a perfect 7-0 in South Atlantic Conference play and was also 7-0 at Moretz Stadium. Thanks to a tremendous regular season, LR hosted a pair of NCAA Playoff games and defeated Florida Tech and Wingate to advance to the NCAA Southeast Regional Final. A season ending loss to Valdosta St. will serve to motivate the Bears this offseason to achieve more in 2019.

After hosting St. Augustine’s, LR will travel to Virginia Union before taking on Newberry at home in the South Atlantic Conference opener. In league play, the Bears will also host Carson-Newman (Oct. 19) and Wingate (Nov. 2). In 2018, Lenoir-Rhyne handed their rivals a pair of one-possession losses. The Bears went into Wingate and came away with a 31-24 regular season victory on Sept. 22 and then broke the hearts of the Bulldogs in the Second Round of the NCAA Playoffs with a 21-17 victory. In that game, Cronic called a double reverse flea flicker with less than a minute to play which ended in a 32-yard touchdown pass to Riley McGee for the win.

The Homecoming game is set for October 5 at 2 p.m. as the University of Virginia at Wise comes to town. Senior Day is scheduled for November 9 against UNC Pembroke. Additionally, there will be postgame fireworks after the home opener against St. Augustine’s.

The Bears will travel to Mars Hill, Tusculum and Limestone in conference play after defeating them all inside Moretz Stadium in 2018.

On top of an exciting year on the field, Lenoir-Rhyne will be celebrating 100 years of football with season-long festivities. Stay tuned to lrbears.com as details will be released on the events surrounding the celebration.