The late registration deadline does not begin until November 19 so that as many groups and individuals can participate as possible without additional fees.  We want everyone to take advantage of this wonderful opportunity to get in the parade line-up early.  We have discovered that it doesn’t matter when you start the process; however, as we approach the late fees beginning, people will scramble to take advantage of the discounted price for entries.  Our goal for this year’s parade was not to increase the costs of entries, but to encourage participants to respond earlier and take advantage of discounts that could be offered.

Entry forms can be downloaded at www.alexandercountync.gov/parade  or send entry questions to alexanderchristmasparade@gmail.com, and I will happily forward forms to you!  You may also reach me by phone at 828.320.7614. We want this year’s parade to be a celebration of community and all of the things that are good about Alexander County! 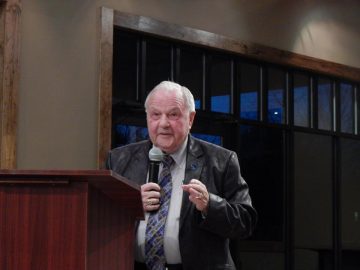 The Honorable Ben Hines has served Alexander County as the Register of Deeds since 1986—that’s 32 years of service to the citizens of this great county. Prior to this service, he retired from the Air Force with a rank of Chief Master Sargent following 31 years of service to his country. That’s two distinguished service careers totally more than 63 years of service from one man! And Ben still tells us that he is looking forward to his 65th birthday so he can draw his social security! Lovingly, Ben has been referred to as “Mr. Air Force” by his fellow retirees at reunions and other military gatherings.

Ben has participated in the Christmas Parade and the Vashti parade more than 30 times each – Ben loves a parade! He is the Recipient of the Longleaf Pine Award—among the most prestigious awards conferred by the Governor of North Carolina for his exemplary service to state and community.

In his spare time, Ben has served over than 20 years as a deacon and dedicated member of First Baptist Church, Taylorsville. He has served on numerous committees and has been chair of various committees throughout the church.

Ben spearheaded the American Legion and veteran organization’s efforts to erect three flagpoles at the county administration building on Liledoun Road. He researched, ordered and helped with funding to purchase and install the flagpoles for the United States, North Carolina and Alexander County flags.

Ben organized and worked with the County’s Veterans Affairs Office to honor the county’s vets in an annual Veteran’s Day program.

Ben helped organize and lead many of the festivities of the County’s Sesquicentennial Observance (150th Anniversary). A part of the celebration was the refurbishing and creation of a Bell Tower on the courthouse lawn. The county bell was originally placed in the Alexander County Courthouse built in 1902, it remained in storage for years, but eventually took its place of prominence in the County’s Bell Tower. Lawyer and town leader Jerry Campbell and Ben served as co-chairs for this project to its completion.

Ben’s love of country has been further evidenced by his planning of a “flyover” of a United States Air Force FB-111 aircraft for the Bi-Centennial of the U.S. Constitution. He led a ceremony on the county courthouse lawn. His love of the Air Force has been seen as he arranged a tour and concert of the United States Air Force Orchestra on several different occasions, both in schools and at the Alexander Central Auditorium.

Ben assisted in the county fundraiser called “Bovine Bingo,” a fundraiser for the American Cancer Society, which entailed placing a cow on the courthouse lawn that was divided-off into numbered squares, and everyone waited for the cow to do make a deposit in the winner’s square. Town leader Beth Arndt was a co-organizer with him for this well-supportive fundraiser.

As a long time member and supporter of the Ellendale Ruritan Club, he has held almost every office and position with the volunteer group. Since January 1984, Gentle Ben has served on many Ruritan Club committees and served as club president twice and other officer roles.

Ben and his wife Gwyn Kerley Hines (who died after a courageous battle with cancer) had five children: Sherry, Benji, Alicia, Scott and Amy. He is now married to Margie Bumgarner Mays Hines. Ben’s military career added to the years of service of his sons, daughters and sons-in-law totals 130 years of collective military service from this one remarkable family!

As you can see, the parade plans and activities are in high gear.  We are working hard to secure the balance of our entries and assistance from the public is greatly appreciated!  IF you are affiliated with a club, a church, a business, etc. please encourage those responsible to move quickly to secure your place in the 72nd Annual Alexander County Christmas Parade.