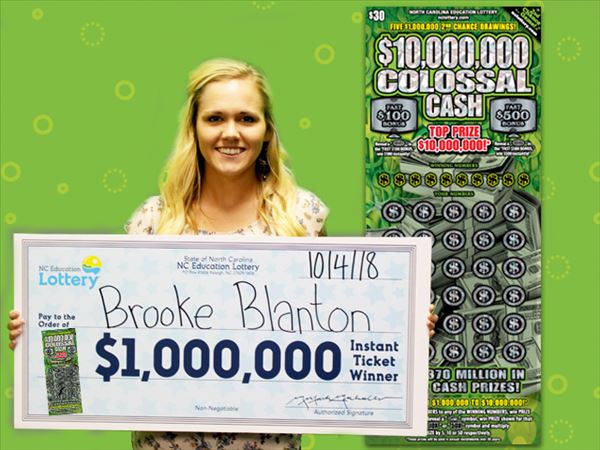 For Brooke Blanton of Hickory, a trip into town for some dinner Wednesday night turned into a $1 million lottery win.

“I was planning to get some fast food,” Blanton said. “But then I decided to go get a lottery ticket. There’s really no rhyme or reason to why I did.”

The bank teller stopped at the C&S MART on Old Shelby Road in Hickory and bought a $10,000,000 Colossal Cash ticket. She took the ticket to her car and scratched it.

“The first thing I scratched was a money sign,” Blanton said. “So I knew I won something.”

She kept scratching and found out she won $1 million.

“My heart dropped into my stomach and I started shaking,” Blanton said. “I was so excited I completely forgot about getting something to eat. I didn’t get a lot of sleep last night. I kept the ticket in my pocket-book by my pillow the whole night.”

Blanton woke up early Thursday morning and drove to Raleigh to claim her prize at lottery headquarters. She had the choice of taking an annuity that has 20 payments of $50,000 a year or a lump sum of $600,000. She chose the lump sum. After required state and federal tax withholdings, she took home $423,015. She plans to use some of the money to buy a new home.

“I don’t want anything too fancy,” Blanton said. “Just something small with some land. I still can’t believe I won. This is life changing.”