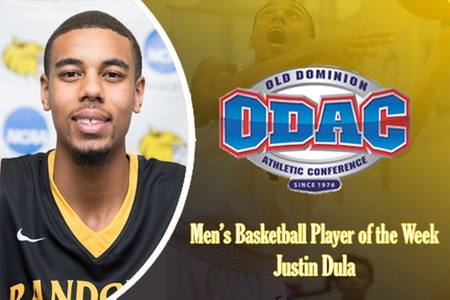 The Old Dominion Athletic Conference announced the Men’s Basketball Player of the Week on Monday, November 26. Randolph sophomore Justin Dula (Taylorsville, N.C./Alexander Central) was bestowed with the honor for the first time in his career.

Last week at Greensboro, Dula scored a career-best 20 points on 8-of-9 shooting to lead Randolph to an 89-79 victory over the Pride. On Sunday against Bridgewater, Dula pulled down a career-high 16 rebounds and added nine points in the Wildcats’ 74-73 victory. The 16 rebounds were the most in a game for a Wildcat player since Derrick Woods-Morrow last did it in 2012.
In two games, Dula was 11-of-19 (57.9%) from the floor and 7-of-10 from the free throw line. He also dished out a total of six assists and only turned the ball over once.