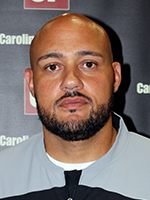 Former Alexander Central assistant football coach Joe Glass has stepped down after one season as the head coach at Eastern Guilford. The team went 10-3 in 2018. Reports are that Glass has accepted the head coaching job at Lincolnton. Glass left J.M. Robinson High School in Concord after four years following the 2017 season. At Robinson, Glass had a record of 0-11 in his first season then followed it with 8-5, 10-3, and 12-3 campaigns. The 12-3 season in 2017 ended with a loss to Charlotte Catholic in the Western Regional Finals. Glass was also the head coach at Patton High for two seasons in 2012 and 2013. Glass served as an assistant at Alexander Central under former head coach Chris Deal, he is a graduate of Freedom High School in Morganton.