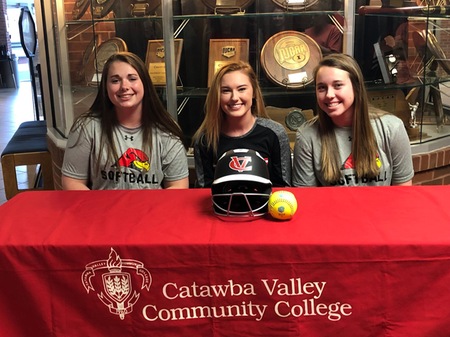 “It’s a very exciting day for CVCC softball,” said Red Hawks head softball coach Josh Bumgarner. “To be able to have three very good softball players as our first signings is huge for us. We have high expectations, and these three ladies are the foundation for our program.”

The Most Valuable Player of the 2018 3A state championships series, Millsaps recorded a 28-5 record and 3.14 ERA on the mound for the Cougars as a senior with a 3.14 ERA and 128 strikeouts in 196 innings pitched. The 5-foot-10 pitcher threw 31 complete games (eight shutouts) during her senior campaign, and she finished her career at ACHS with a 36-6 pitching record.

Offensively, Millsaps tallied 74 hits (14 doubles, one triple, 14 home runs) and drove in 67 RBIs during her junior and senior seasons. “Chesney Millsaps has big game experience in the pitcher’s circle and a big bat to go with it,” said Bumgarner, who coached both Millsaps and Dejarnette during his time as an assistant coach at Alexander Central High School. An 5-foot-10 outfielder, Dejarnette finished her ACHS softball career with 79 hits (25 doubles, two triples, four home runs), 47 runs scored and 57 runs batted in.

“Kelsea Dejarnette is a solid outfielder with a strong arm and also has a good stick with some home run pop as well,” Bumgarner said. Both athletes helped lead Alexander Central to a 28-5 overall record, 12 mark in Northwestern 3A/4A and a 3A state softball championship last spring — claiming the program’s 11th state title all time. Millsaps and Dejarnette were all-conference, All-Region and all-state selections during their senior season at ACHS. Millsaps was also named the 3A West Region Pitcher of the Year. Also multi-sport athletes, Dejarnette and Millsaps were a part of a CVCC volleyball program this past fall that went 36-10 overall, claimed its seventh-straight conference championship, placed ninth nationally and won three matches at the National Junior College Athletic Association (NJCAA) DII national tournament for the first time in school history.

McClure, who played first base, outfield and pitched for West Iredell High School, tallied a .360 batting average with a .407 on-base percentage during her senior season last spring. She scored a team-high 16 runs, drove in seven RBIs and tallied two doubles en route to earning all-conference, all-district and all-state accolades during her final season as a Warrior. A four-year varsity softball player for West Iredell, McClure totaled a career .378 batting average, .441 on-base percentage, scored 77 runs and drove in 43 RBIs. She finished her prep career as a three-time all-conference selection. “Katelyn McClure is an all-around good softball player who can play many positions for us,” Bumgarner said. “She can hit to all parts of the field with power.”

CVCC officially starts its softball program this fall and will be immediately eligible for championship contention in the spring of 2020.