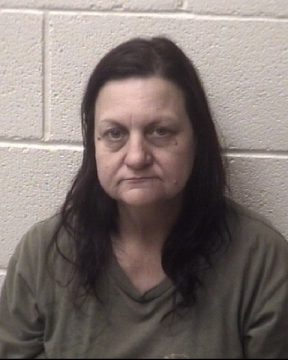 A Taylorsville woman has been charged after an armed confrontation with Alexander County Sheriff’s Deputies over the weekend.

According to Chief Deputy Todd Jones, officers were dispatched at 8:40 pm Saturday to a residence on Earp Lane in Hiddenite in reference to a woman armed with a shotgun and pointing it another person. Deputies arrived and located 51 year old Sheri Coley of Taylorsville in a vehicle. Coley refused repeated requests by officers to exit the vehicle. Coley was armed with a shotgun and what appeared to be a black pistol . Coley is alleged to have pulled the pistol and pointed in the direction of officers. Officers drew their weapons and a deputy was able to disarm Coley and take possession the the pistol. The pistol turned out to be a BB-type gun. A loaded .410 shotgun was also confiscated by officers.

Coley is charged with assault by pointing a gun. She is being held in the Alexander County Detention Center and is scheduled to make a court appearance today in Taylorsville.