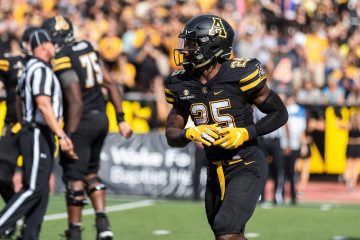 Appalachian State senior running back and team captain Jalin Moore will miss the remainder of the 2018 season after suffering a fracture and dislocation of his right ankle at the end of a 27-yard touchdown run during Tuesday’s 35-9 win at Arkansas State.

After surgery, Moore is expected to need eight to 12 weeks for a full recovery.

One of the best runners in school history, Moore ends his App State career with 3,570 rushing yards and 33 rushing touchdowns, as well as 235 receiving yards and a score through the air. He ranks sixth in the school record books in rushing yards, seventh in rushing touchdowns and sixth with 17 100-yard rushing efforts. The Shelby, N.C., native rushed for 400 yards and six scores through five games this season. He piled up 119 yards in one quarter vs. Gardner-Webb and 123 yards through three quarters in a Sun Belt-opening win over South Alabama.

“I hate this for Jalin, who has worked so hard to be the player and person that he is,” head coach Scott Satterfield said. “We will continue to support him, and he will remain a leader on this team, just in a different role. He is a special young man and has a bright future. It’s now time for some of our younger guys to step up and carry the load, especially at the running back position.”

Moore, who was on preseason watch lists for the Maxwell and Doak Walker awards, is the only active FBS back who’s rushed for at least 235 yards in four career games. He currently ranks second among active FBS players in career rushing yards behind Washington’s Myles Gaskin.

Known to friends and teammates as “J.J.” or “Boobie,” Moore has played a key role in the Mountaineers’ rise to be one of the best teams in the Group of 5 after transitioning from the FCS ranks. App State is the first program to ever win three straight bowl games in each of its first three years eligible after the move up to FBS, and the Mountaineers claimed back-to-back Sun Belt Championships in 2016 and 2017. Their record of 40-10 in the last 50 games trails only Alabama, Clemson, Ohio State, Oklahoma and Wisconsin among FBS programs.

“First of all, thanks to my App State family for the love and prayers,” Moore said. “I’m eager to get back and finish what I started. I wish I could start the rehab process right now. I hate that this is the way my App career ended, but everything happens for a reason. This is only going to make my story better in the end. We’ve got a special team this year, and I know them boys will still get the job done. All I can ask for is for them to keep that same swagger, that same mindset. Don’t feel sorry for me, this is only a test that I will not fail. Anybody can get hurt any play, and any play could be your last. That’s what we touch that sign for. We’ve got to give our all for App, because you never know when it will be your last game for the Black and Gold.”