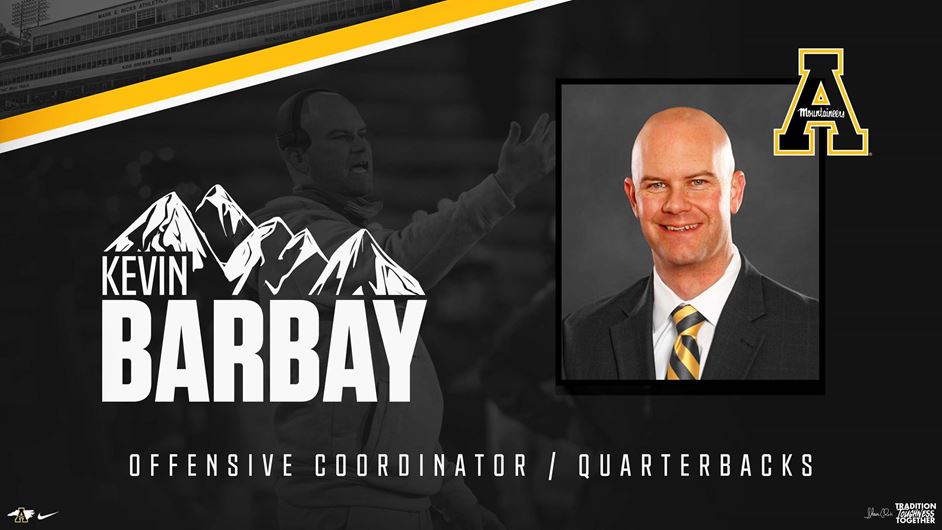 Barbay, 39, spent the previous three seasons at Central Michigan and was the Chippewas’ offensive coordinator/quarterbacks coach in 2021. CMU capped a 9-4 season with a bowl win against Washington State, scored at least 30 points in eight games and ranked in the top 25 nationally in total offense (443.4 yards per game).

CMU’s Lew Nichols III led the nation with 1,848 rushing yards and scored 16 rushing touchdowns last season as a redshirt freshman. Through the air, the Chippewas averaged 265.4 passing yards a game while totaling 31 touchdown passes and just 10 interceptions in their 13 games.

“We are excited to welcome Kevin, his wife Kacie, and their children to the App Family,” Clark said. “Kevin has directed prolific offenses as a coordinator and has quality experience coaching at multiple levels of college football. He will help us continue our strong tradition on the offensive side of the ball and will be a big asset to the program as a leader and mentor.”

Hired as a full-time college football assistant at age 25 and Division I football assistant by the age of 28, Barbay also has worked at Stephen F. Austin, Florida, Colorado State and Lamar during the last decade. He was the assistant head coach and wide receivers coach on Central Michigan head coach Jim McElwain’s staff from 2019-20.

“My wife, my kids and I are extremely excited to join Coach Clark’s staff and family at App State,” Barbay said. “I’m thrilled to have the opportunity to work with a program that has such a storied tradition of winning.

“With the quarterbacks and other players returning, there are great things in store for this offense. A lot of it will be familiar, but we’ll throw in some wrinkles. We will have an attacking philosophy. We will be simple, aggressive and detailed in our approach. I’m most excited to invest in our players’ lives, build trust and have open lines of communication. I can’t wait to get started.”

Before a COVID-abbreviated 2020 season, Barbay helped CMU post an 8-4 regular season in 2019 and reach the MAC Championship Game as the league’s West Division champion. Kalil Pimpleton and JaCorey Sullivan combined to make 139 receptions for 1,702 yards and nine touchdowns that season.

Barbay made his debut as a college offensive coordinator and quarterbacks coach at Stephen F. Austin in 2018, after he and current App State assistant Mark DeBastiani worked together at Florida on McElwain’s staff for three seasons from 2015-17.

He was Colorado State’s director of player personnel under McElwain in 2014 following two years as a wide receivers and special teams coach at Lamar from 2012-13.

A native of Nederland, Texas, Barbay played collegiately for MVP-winning Super Bowl quarterback Doug Williams at Grambling State. He earned a bachelor of science degree with a major in exercise science and fitness management from Lamar in 2005 and a master of science in education-sport management from Baylor in 2007.

Barbay and his wife, Kacie, have two daughters (Kynslie, Karoline) and one son (Karson).