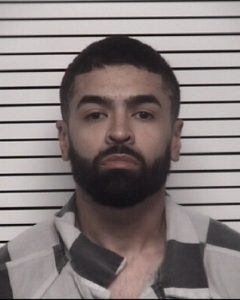 On Thursday, members of the Iredell County Sheriff’s Office Interstate Criminal Enforcement (ICE) Team were on Interstate 77 working drug interdiction. Deputies attempted to conduct a traffic stop in the area of the mile marker 62 on a 2011 GMC Yukon with a South Carolina registration plate for traffic violations. The vehicle refused to stop and fled north bound on Interstate 77 before exiting on East Memorial Highway in Union Grove. Deputies continued to pursue the vehicle which eventually crashed into a wooded area on Jericho Rd. 31-year old Oseas Ivan Munoz of Charlotte was taken into custody.

A search of the vehicle located nearly five pounds or 2,142.88 grams of MDMA (Ecstasy) pills as well as a firearm, marijuana, and $3,215.00 in US currency. There were approximately 8000 of these dangerous pills that were disguised as candy in various shapes and colors. Deputies also learned that Munoz was wanted out of South Carolina for Felony Selling a Controlled Substance.

He was placed in the Iredell County Detention Center with a $850,000.00 secured bond.