A freshman from Hiddenite is making his mark for Lenoir-Rhyne Football ! 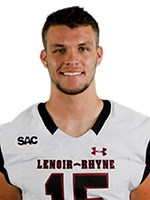 Making his first career start against a top-10 defense in points allowed, Gunnar Anderson led the Bears to their fifth straight victory 34-21 at Newberry on Saturday. The freshman went 8-for-16 for 88 yards and didn’t turn the ball over to help LR to its first win over the Wolves in three years. Anderson was the Northwestern Conference Player of the Year for Alexander Central in 2017, leading the Cougars to the league title.

Kyle Dugger was the star of the game, returning a pair of punts for touchdowns to keep the Bears in the game. Trailing 14-7, Dugger took one 69 yards to even the score midway through the second quarter. After Newberry took a seven-point lead, Dugger ran one 64 yards to the house to start a 20-0 second half scoring run for the Bears.

The Bears are now 5-1 on the season and 4-0 in the South Atlantic Conference.