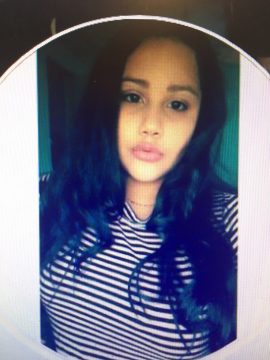 On Tuesday, January 29, 2019 a report was filed with the Iredell County Sheriff’s Office in reference to a runaway juvenile. Deputies responded to 132 Fraley Road near Statesville. According to her mother, Chavez was last seen at home on Monday, January 28, 2019 around 10:30 pm. Chavez’s mother discovered Lizzy Chavez missing around 8:00 am on Tuesday January 29. Chavez left her home on foot, her clothing description is unknown. Chavez did take a blue-grey backpack with her.

Detectives interviewed friends and she is believed to be in the company of a Hispanic male in his early 20’s who goes by the name of Cristhiane or “Chrasfell” and who lives in Charlotte. This male may be driving a black Chevrolet Camaro.

Update: The Iredell County Sheriff’s Office has confirmed that Chevez has been located. She is safe and now in her mother’s custody according to a news release.