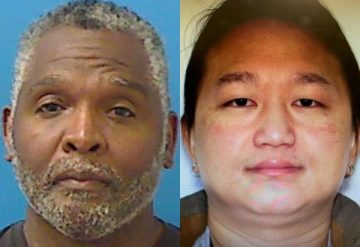 In 2020, Narcotics Investigators with the Catawba County Sheriff’s Office, working in conjunction with federal authorities, developed information that James was transporting quantities of methamphetamine from Georgia to Catawba County for distribution. In July of 2020 investigators stopped James as he returned from Georgia and arrested him for trafficking in methamphetamine.
This arrest resulted in investigators learning that James was purchasing methamphetamine from Lee. A search warrant was executed at Lee’s Georgia residence where authorities seized a firearm, four pounds of marijuana and more than $7,900 in cash. Authorities also established that, over the course of two years, Lee was responsible for supplying James with more than two pounds of methamphetamine.

Lee was tried last week in federal court and was found guilty on all counts against him. James previously entered his guilty plea. They both await sentencing in federal court. Sheriff’s Investigators partnered with the Drug Enforcement Administration (DEA) and the Bureau of Alcohol, Tobacco, Firearms and Explosives (ATF) in this investigation. The United States Attorney’s Office for the Western District of North Carolina prosecuted this case.