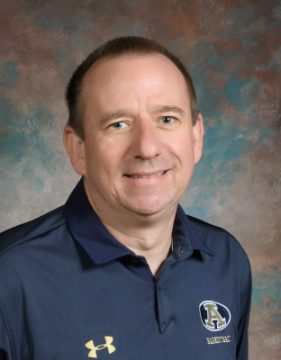 Wills has been at ACHS since 2004 after moving from Virginia where he worked at Ferrum College. He also coached at Clark University in Massachusetts and managed the 1993 Men’s Basketball Team at UNC-Chapel Hill, a team that won the national championship.

He expects to lean heavily on his work as a coach in this new role. “You know schools are a big team and the goal of every coach is to help their team succeed and my approach in this position will be to help this team succeed. That’s our teachers and staff and certainly our students,”says Wills.

Wills says the profession has changed a great deal since the COVID-19 pandemic but he’s ready for the work. “There was probably a time when you thought of education where you thought only what happened in the classroom educationally. But I think we can’t ignore all the other things that our children are going through” he says.

“I’m super excited about the opportunity. I have a ton of respect for Mr. Lail and the work that he and his staff are doing. I’m excited to join that effort to continue to maintain Alexander Central as a tremendous school and to help us grow in any way that I can. I think it’s a great opportunity and challenge that I’m looking forward to.”

Wills will complete the basketball season with the Men’s Basketball team.

He lives in Hickory with his wife, Marnie. His daughter Carolina is a sophomore at UNC-Chapel Hill.