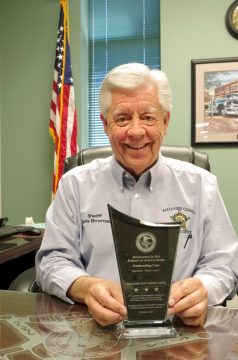 On February 8, 2022, investigators with the Alexander County Sheriff’s Office Narcotics unit were recognized by the United States Attorney’s Office for their participation in “Operation Dixie Crystal,” Sheriff Chris Bowman announced this week.

Two narcotics detectives with the Sheriff’s Office, whose names are not being released so as to not endanger their safety, received glass plaques commemorating their service in the drug law enforcement operation.

According to the U.S. Attorney’s Office in the Western District of North Carolina, since 2015, Operation Dixie Crystal has resulted in the arrest of more than 200 defendants, seizures of more than 200 kilograms of methamphetamine with a street value of approximately $20 million, over $2 million in drug proceeds, and more than 60 firearms.

Officers stated that the methamphetamine is mainly all from Mexico, where it is made is large quantities. This has overtaken the instances of meth labs which had been often found in this area in the past. The drug comes from Mexico via California or from Georgia. Some is even directly mailed to North Carolina in packages.

“This operation has interrupted the methamphetamine trafficking organization within Alexander County. This operation was made possible through the hard work by the Department of Homeland Security Investigations and state and local agencies throughout Western North Carolina,” said Sheriff Chris Bowman. “We’re grateful and thankful to have the relationship with the Homeland Security Task Force to help us fight drugs here in Alexander County,” Bowman continued.

Steve Kaufman, Assistant U.S. Attorney, stated that “This has been the most productive investigation in the Western District of North Carolina.” “This doesn’t mean drug investigations are over,” Sheriff Bowman related. “It means that this one operation has come to an end. We are still working closely with other agencies, including HSI and others, to combat the drug problem.”

He noted that methamphetamine is the cause of many overdose situations, some fatal, especially since drug cartels are lacing meth with fentanyl to enhance the “high” from meth.
“People are not seeing what we’re doing every day because of the sensitivity of the situation and the issue of safety of our officers investigating the drugs,” Bowman said.

Anyone who has observed possible drug or other illegal activity may report a tip to the Crime Stoppers phone line, 828-632-8555, or call the Sheriff’s Office, 828-632-1111. Or, tips may be submitted via TipSoft at www.p3tips.com, then select “Alexander County Sheriff’s Office” for the agency.