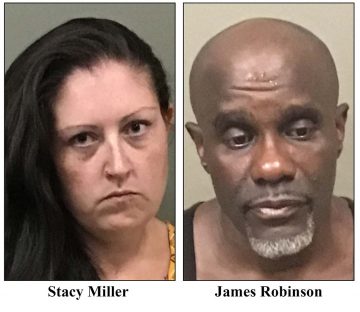 A woman is dead in a Wilkes County triple shooting that sent two others to a hospital with gunshot wounds.

Shortly after midnight on Sunday morning, the Wilkes County Sheriff’s Deputies responded to reports of a shooting on Hunting Creek Road. Deputies located three people suffering from gunshot wounds. A woman who was pronounced dead at the scene. Her name has not been released.

The other gunshot victims, a woman and man, were transported to Wake Forest University Baptist Medical Center in Winston-Salem with life-threatening injuries.

Deputies located a vehicle that witnesses described as leaving the scene before officers arrived. The car was located near Statesville Road and Hwy 421 a short time later. North Wilkesboro officers then engaged in a pursuit of the vehicle.

Following the chase, 33-year old Stacy Elizabeth Miller and James Louis Robinson, age 54 of Hays, were both charged with murder. They are being held without bond in the Wilkes County Detention Center.

The Wilkes Record contributed to this story