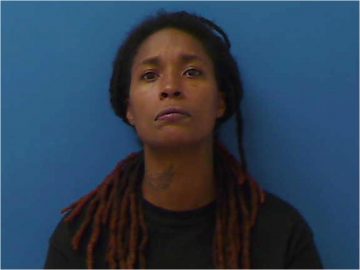 32-year old Whitney Janae Gatewood of Durham has been arrested by the Hickory Police Department. Gatewood is charged with a series of offenses that include assault by pointing a gun, assault with a deadly weapon, breaking and entering to terrorize or injure, possession of a firearm by a felon, assault on a government official, fleeing to elude arrest with a motor vehicle, resisting a public officer, and reckless driving to endanger.

Bond is set at $25,000. Gatewood is being held in the Catawba County Detention Center and will make a court appearance today in Newton.

Some additional details have been released by Hickory Police.

On Tuesday, October 20th, HPD Officers responded to an assault call at the Argyle Place Apartment complex on 16th Street N.E. in Hickory. The victim reported that Gatewood entered the residence and assaulted her. Warrants for Gatewood’s arrest were issued.

On Thursday, Hickory Police responded to an assault in progress at a residence on 10th Avenue S.E. The report involved a subject with a gun. Officers attempted to stop the suspect vehicle as the driver left the scene. The vehicle did not stop. Officers pursued the vehicle with the chase ending when the vehicle crashed into a power pole at the intersection of 3rd Avenue S.E. and Highway 127. Gatewood was arrested after she exited the vehicle and attempted to flee on foot.