On Tuesday at approximately 10:30 a.m., Caldwell County Narcotic Agents and Patrol Deputies stopped Eric Jones and Roy Morris’ vehicle as it traveled through the town of Sawmills. The two were stopped after being observed by Narcotics Agents at a known meth dealer’s residence in Burke County. The two were arrested on the meth charges.

Shortly after the arrest of Jones and Morris, Caldwell County Narcotics Agents obtained a search warrant for Dylan McBryar’s residence on Dogwood Drive in Burke County. Officers searched the home and found McBryar at the residence. Police seized more than 600 grams of meth, over $12,000 in U.S. currency, and five firearms. 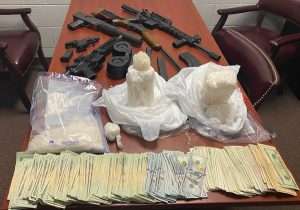