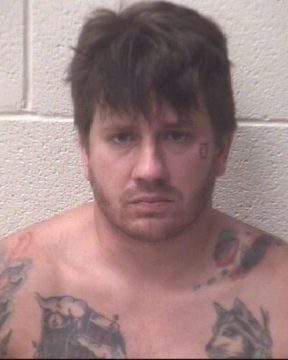 On Tuesday, August 10, 2021, at approximately 12:38 AM, Alexander County Sheriff’s Office communications received a call in reference to a Breaking & Entering in progress on Carrigan Road in the Taylorsville Community of Alexander County. A homeowner was sleeping and heard a crash, discovering that a window at the residence was broken. The homeowner viewed a home doorbell camera, then called 911. Officers arrived on scene, where they found Jeffery Michael Minton, W/M age 29 of Hiddenite, NC. Minton was bleeding from injuries to his arms sustained while breaking into the residence. Minton was combative toward officers, leading to one of the responding officers being assaulted, a patrol vehicle being damaged, and a taser being deployed. Additional officers arrived on scene and Minton was taken into custody. Minton was transported to Catawba Valley Medical Center by Alexander County EMS, where he was treated for lacerations to his arms. Two of the arresting officers were also evaluated for minor injuries and biohazard exposure at Catawba Valley Medical Center.

Minton was charged with Felony First Degree Burglary, Felony Assault Inflicting Injury on Law Enforcement, and three counts of Misdemeanor Injury to Personal Property. Minton is currently being held under a $250,000 secured bond with a first appearance date of Monday, August 16, 2021 in Alexander County District Court.