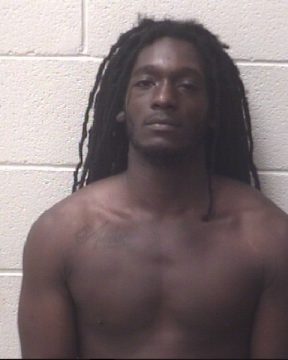 25-year old Delone Allison Goss of Claremont is facing a series of felony charges following an alleged assault on Wednesday.

Alexander County Sheriff’s Deputies responded in reference to an assault complaint filed by a female. The female indicated that her boyfriend had arrived and was armed. Goss was still at the scene when deputies arrived. He was taken into custody and charged with felony robbery with a dangerous weapon, assault by pointing a gun, assault on a female, assault-communicating threats, and felony motor vehicle theft.

Goss is being held in the Alexander County Detention Center without bond.

Update: The Alexander County Sheriff’s Office has released the following

The victim was interviewed and stated that the suspect had showed up at the residence due to a domestic situation. The suspect became angry with the victim and struck her and took her cellphone at gunpoint. The suspect then stole her vehicle and left the residence, returning shortly thereafter.