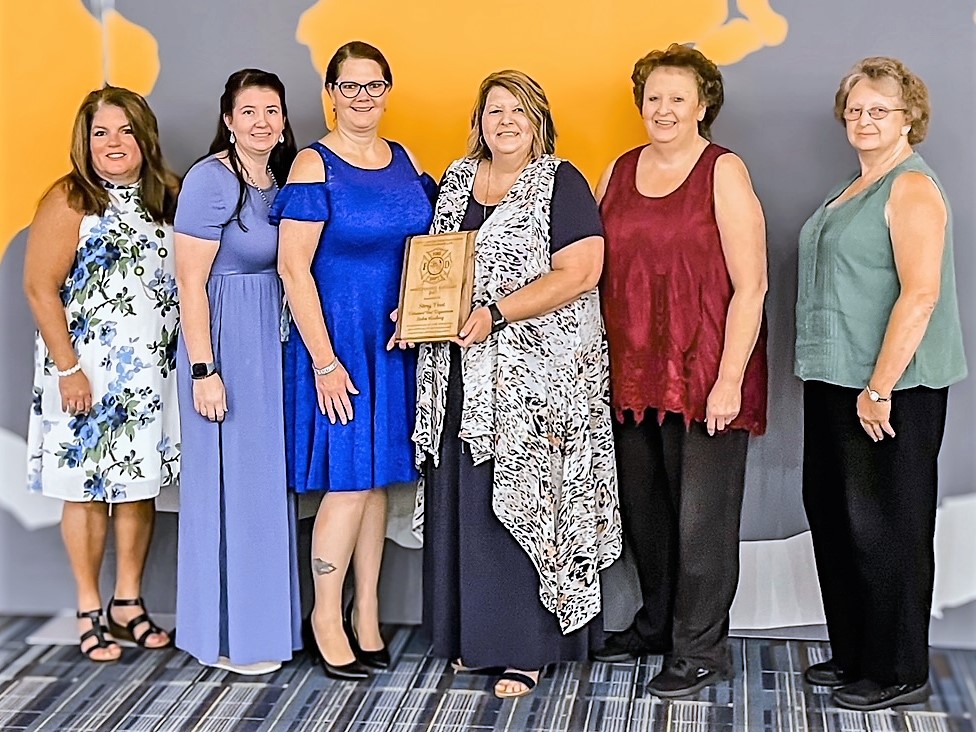 STONY POINT (October 4, 2021) — The Stony Point Volunteer Fire Department’s Ladies Auxiliary was recently recognized with a distinguished state award to recognize their steadfast contributions to the community. The group was presented the “Most Helpful Auxiliary” award by the NC State Firefighters Association Auxiliary during the South Atlantic Fire Rescue Expo in Raleigh on August 14, 2021.

“What really was a deciding factor for the judges was the Hiddenite Family Campground flood and how the Auxiliary was there for their community, working to help rescue and comfort community members and then later on – staying strong to comfort their firefighters. This group of women truly is a blessing to their fire department family and their community!” said Mary C. Weigl, President of the NC State Firefighters’ Association Auxiliary (NCFSAA).

Weigl said the award, “is our chance to spotlight the one auxiliary who went above and beyond during the year to assist their fire department and community.”
The NC State Firefighters Association Auxiliary was founded in 1964 and is a group of auxiliaries and individuals from around this great state who come together to share ideas on fundraising for our firefighters, firefighter support, fire wife support, giving back to our communities and our annual support of the NC Jaycee Burn Center.

Mark Earle, Alexander County Fire Marshal, commended the Stony Point Ladies Auxiliary for their dedication and hard work. “I am proud of these ladies for having the biggest hearts of anyone I know. Not only do they support firefighters on the scene, but they have shown tremendous support to families, neighbors, community, other fire departments, and other auxiliaries,” Earle said. “They have set the example as to what an auxiliary team should be and have shown their devotion and commitment to Alexander County for several years now. Congratulations and a job well done!”

In his recommendation letter, Stony Point Chief Scotty Abernathy stated, “The Stony Point Volunteer Fire Department Ladies Auxiliary was formed in March of 2006, where officers were also voted into place. Since this time, these ladies have put in hard work and dedicated themselves to helping the men and women of the community. The Stony Point Volunteer Fire Department Ladies Auxiliary responds to all major calls such as working fires, inclement weather incidents, major catastrophes, and any other prolonged calls. On these major calls in which the Ladies Auxiliary members respond, they provide medical rehabilitation for firefighters as well as assist firefighters with changing SCBA cylinders and ensuring safety of all members on scene. The Auxiliary has been a part of forming the countywide rehabilitation team. They have also gone to neighboring departments to help form their auxiliaries as well as supporting them.”

The Auxiliary also helps neighboring fire departments and auxiliaries as well as needy families in the community. The ladies hold three fundraisers per year: an annual cruise-in that takes place in May, and two BBQ chicken/pork fundraisers that take place in April and November.

“The pandemic changed the way to interact with the community, but the auxiliary continued with the fundraisers and community events while providing a safe environment. Our department experienced difficult calls this past year with the death of one of our members, two members who battled cancer, and a tragic flood that took the life of five community members. Our department was blessed with the support we received from the auxiliary. They were on the scene with rehab and, most importantly, with emotional support for our members,” said Chief Abernathy.