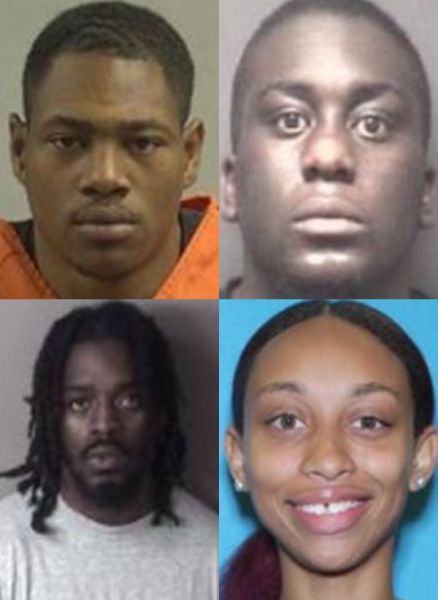 30-year-old Rashadd Montell Hill of Dudley, N.C., 27-year-old Damon Jaquan Gresham of Concord, N.C., and 22-year-old Chamodd Jamek Clagon of Greenville, N.C., were all were all arrested by Statesville Police Officers and charged with felony larceny of a motor vehicle, first-degree trespassing and injury to property. 21-year-old Destiny Montae Morgan of Raleigh was charged with felony aid and abet larceny.
In addition, Gresham was served with an outstanding warrant from Gaston County for failure to reduce speed and driving while revoked. Clagon was served with an outstanding warrant from Washington County for felony larceny.

Crime Reduction Team members spotted a Chrysler passenger vehicle traveling on Sherill Drive traveling toward Industrial Drive. With no other traffic in the area and the close proximity to the crime, members of CRT conducted a stop of the Chrysler passenger vehicle for a motor vehicle violation.
When CRT Officers contacted the occupants of the Chrysler, they observed the above males were muddy, very wet, and dressed in all dark clothing. Officers detained the vehicle occupants while Patrol Officers met with personnel of Great Western Motorcycles and viewed the security footage. Due to distinct details on the males’ clothing, CRT Officers positively identified the males as the males in the security footage at Great Western Motorcycles.