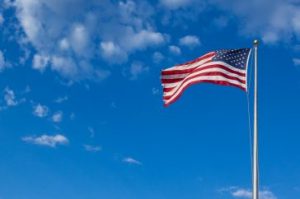 It’s Flag Day ! The Continental Congress in Philadelphia adopted the “Stars and Stripes” as the national flag of the United States this day in 1777

1775: The Continental Army was founded by the Second Continental Congress for purposes of common defense. This event is considered to be the birth of the United States Army

1940: The Nazis opened their concentration camp at Auschwitz in German-occupied Poland

1951: “Univac I” was unveiled. It was designed for the U.S. Census Bureau and billed as the world’s first commercial computer

2017: Representative Steve Scalise of Louisiana is shot and wounded by a terrorist while practicing for a charity baseball game in suburban Washington, D.C.

Weather: The tropical weather is over. Lots of Sunshine and lower humidity this week !

What a career this guy had https://apnews.com/article/ned-beatty-entertainment-arts-and-entertainment-c72da9a1db177ce0759cabaca117bdf6

A pretty good tale for this man’s grandchildren https://boston.cbslocal.com/2021/06/11/lobster-diver-swallowed-by-whale-cape-cod-michael-packard/

It’s been so stuffy of late, the mildew has mildew

Quote of the Day: “Honest disagreement is often a good sign of progress”…Mahatma Gandhi