1863: The last Thursday in November is declared as Thanksgiving Day by President Abraham Lincoln

1922: Rebecca L. Felton became the first female to hold office of U.S. Senator. She was appointed by the Governor of Georgia to fill a vacancy. 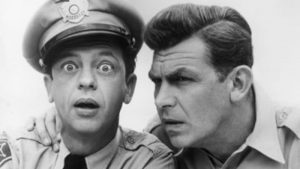 1960: The first episode of the Andy Griffith Show airs on CBS

1989: Art Shell becomes the first black head coach in the modern NFL when he took over the Los Angeles Raiders.

1995: O. J. Simpson is acquitted of the murders of Nicole Brown Simpson and Ronald Goldman

Weather: Sunny with a high around 68

It really is Monday so Suck it up Buttercup !

Quote of the Day: “America is a fabulous country, the only fabulous country; it is the only place where miracles not only happen, but where they happen all the time”…Thomas Wolfe (Born this day in 1930)