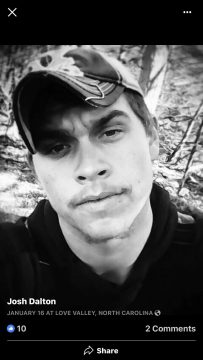 A man suspected of a shooting another man Sunday night in Iredell County is now in custody. Iredell County Sheriff Darren Campbell said this afternoon that 19 year-old Joshua David Dalton of Statesville was taken into custody on Wednesday in Floyd County Virginia.

Sunday, around 8pm, Iredell Deputies responded to a shooting at 172 Damascus Church Road. A male victim had suffered a non life- threatening gunshot wound. Dalton was identified by a witness as a suspect. The witness told officers that Dalton was heading to Alexander County.

An intense search lasted into Monday for Dalton in both Iredell and Alexander Counties. His vehicle was found abandoned. Dalton will be returned to North Carolina and face a series of charges including assault with a deadly weapon with intent to kill.