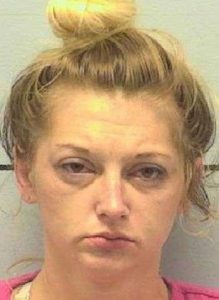 Check the fuel gauge before your steal a car !

A Burke County woman is charged with leading law enforcement on a high-speed chase on Monday that ended when the stolen vehicle ran out of gas.

Reports indicate a Ford Explorer was stolen from the Walmart parking lot on Morganton Heights Boulevard. Local law enforcement agencies were told to be on the lookout for the stolen S.U.V.

An officer reportedly got behind the vehicle on Salem Road and attempted to pull it over but the driver allegedly fled, resulting in a pursuit. The report says that the chase occurred on Salem Road, Burkemont Avenue, Interstate 40, Mineral Springs Mountain Road, and N.C. 18. Speeds during the chase exceeded 100 miles per hour.

The pursuit ended when the vehicle ran out of gas on N.C. 18 South at which time Burhans was taken into custody.

Burhans has multiple convictions on record, dating back to 2016. The most recent was in January, 2019 in Burke County. Following Tuesday’s arrest, she was placed in jail in Morganton under $21,000 secured bond. She has a court appearance set for Thursday.