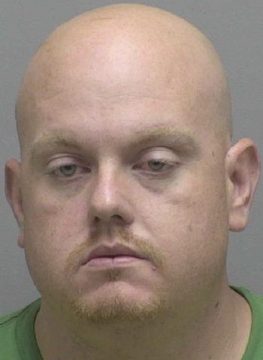 34-year-old Stephen Brett Dellinger of Hickory has been arrested by Lincoln Co. Sheriff’s Deputies on charges of fleeing to elude arrest, possession of a stolen vehicle, and driving while license revoked. He was also served with outstanding warrants out of Catawba County for failure to appear on shoplifting and larceny charges, and he was charged in Catawba County with a probation violation.

Dellinger was arrested following a vehicle chase through three counties. At about 6:40 p.m. yesterday (April 14), Deputies were observing traffic near the intersection of Cat Square Road and Reepsville Road. Officers checked the license plate on a white four-door Buick and learned that it had been reported stolen out of Caldwell County. Deputies pulled out behind the vehicle, but the driver accelerated at a high rate of speed. Officers activated their emergency lights and sirens and attempted to stop the car.

The vehicle traveled over several roads in western Lincoln County then continued into Cleveland and Burke Counties. Deputies lost sight of the vehicle on Pine Ridge Drive in Burke County and began searching the area. The vehicle was found on Pine Mountain Drive with a damaged front end. The driver had fled the scene on foot.

A resident of the area told Officers that a man had walked out of the woods near the entrance to the Pine Mountain Golf Club, offering to pay for a ride out of the area. Deputies found the suspect hiding under a bridge and took him into custody. Officers from Burke County assisted in the arrest.
Dellinger was placed in the Harven A. Crouse Detention Center under a $19,000 secured bond. No court dates are currently listed.