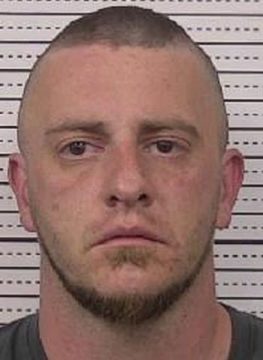 33-year-old Gary Daniel Stallings II of Granite Falls was arrested by Caldwell County Sheriff’s Officers this morning (May 20) on charges of assault with a deadly weapon on a government official, discharging a weapon into a occupied dwelling, and two counts of fleeing to elude arrest.

He was arrested after Deputies responded to a report of someone shooting into a residence on Spring Lake Mobile Home Park Drive in Sawmills. The caller said Stallings drove past his residence in a silver Honda Ridgeline and fired a gun at his home.

The driver then exited the vehicle with a rifle. A Deputy fired one round before the driver threw his rifle to the ground and fled on foot. The shot fired by the Deputy lodged in the Honda’s door and did not hit the suspect. The suspect was taken into custody a short distance from the Honda. He was identified as Gary Daniel Stallings II.

Investigators at the mobile home park obtained video footage that showed the Honda as it stopped in front of the residence where one shot was fired. In the wall of the mobile home, Investigators found a bullet hole that matched the caliber of the rifle thrown by Stallings at the conclusion of the chase.

Stallings was jailed in the Caldwell County Detention Center under a $500,000 secured bond. A first appearance in District Court was scheduled today in Lenoir.