Individuals who missed the regular voter registration deadline may register and vote at the same time during the early voting period. Same-day registrants must attest to their eligibility and provide proof of where they live.

During the early voting period, registered voters may update their name or address, but may not change their party affiliation. 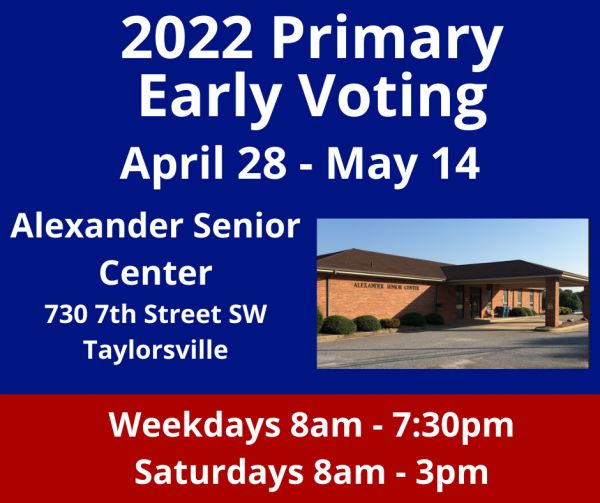 Alexander County Board of Elections Director Patrick Wike said that citizens may wonder why the Alexander Senior Center is the only site for early voting this year, because in previous primary elections there were three early voting sites. The Board of Elections office operated a full schedule (12 weekdays and one Saturday) while the two additional sites operated a limited schedule. The two additional sites operated six days during the early voting period — the last five weekdays (10:00 a.m. to 6:00 p.m.) and the last Saturday (8:00 a.m. to 1:00 p.m.).

He emphasized that all three early voting sites will be open for the upcoming general election. The early voting period for the general election is October 20 through November 5.
If you have questions or need more information, contact the Alexander County Board of Elections at elections@alexandercountync.gov or (828) 632-2990, or visit https://alexandercountync.gov/departments/board-of-elections.