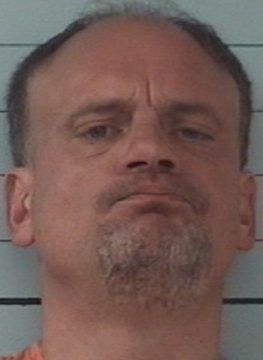 48-year-old Charles Steven Setzer of Morganton was arrested Tuesday by Morganton Public Safety Officers. According to online records, he’s charged with felony malicious conduct by a prisoner and indecent exposure.

Police were called out to the 200 Block of White Street in Morganton to respond to an indecent exposure call shortly before 2:30 Tuesday afternoon. According to arrest reports, Setzer was exposing himself to residents in the area along with drivers passing by, and there was an altercation between Setzer and two other men.

The men were reportedly detaining Setzer until police could arrive, and Setzer allegedly pulled a knife out during the incident. No injuries were reported. Officers took Setzer into custody and transported him to the magistrate’s office. While he was being told about the charge against him by one Public Safety Officer, the arrest report says he lunged forward and allegedly spit on another officer, resulting in the felony charge.

Setzer was placed in the Burke County Jail under $21,000 secured bond. He remained in jail as of earlier today (June 16). A District Court appearance was scheduled today in Morganton.