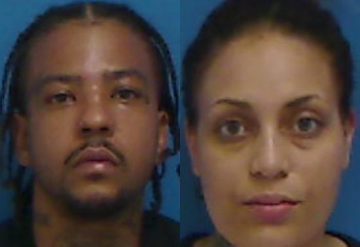 On Saturday, Investigators with the Catawba County Sheriff’s Office Special Enforcement Group (SEG) conducted a traffic stop on a vehicle at the intersection of Springs Road and Section House Road for a speeding violation. The vehicle was operated by Dorian Michael Morgan with Britany Nicole Cantrell as a passenger. A search of the vehicle resulted in the seizure of 238 grams of heroin, 59 grams of cocaine, 19 grams of marijuana, $6,425 in United States Currency, drug paraphernalia, and a firearm.

Morgan received a $225,000 secured bond, he was not listed as an inmate in Catawba County today (May 18). He had a District Court date scheduled Monday (May 16), no upcoming court dates were listed. Cantrell was placed in the Catawba County Detention Facility under a total bond of $169,000. District Court dates are scheduled for May 23, June 6, and July 12. Superior Court appearances are scheduled for June 6 and July 18.