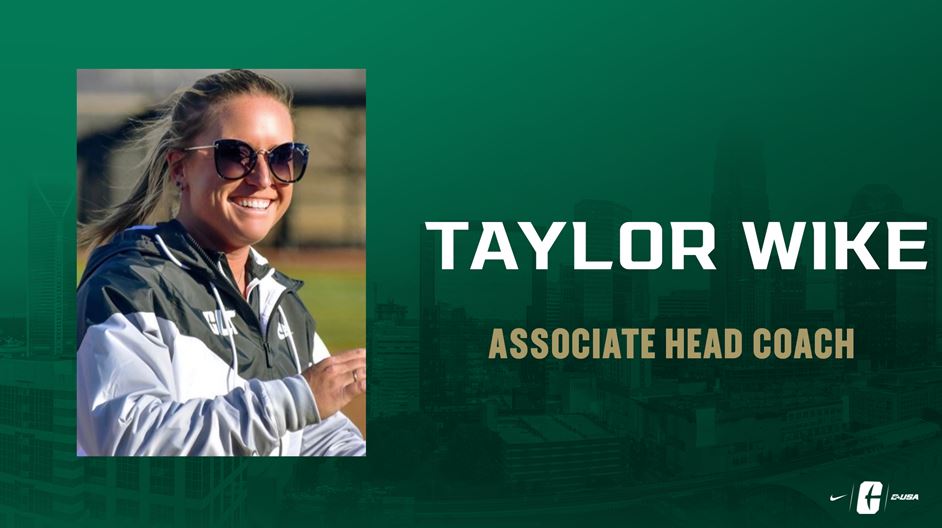 Charlotte, N.C.–Charlotte softball head coach Ashley Chastain has announced the promotion of assistant Taylor Wike to associate head coach. Coach Wike will be entering her fourth season with the Forty-Niners this upcoming season.

“Coach Wike has been a cornerstone in our program since 2019 and has been shoulder to shoulder with me building every channel of our program from our current player development to recruiting top prospects nationally”, said head coach Chastain. “In my opinion, there is no one more deserving of the promotion as Taylor has worked extremely hard to make our program competitive on a national scale and represents our athletic department with integrity and class”.

Wike has been an important piece in the success that Charlotte softball has reached in recent years, which was capped off during the 2022 season as Charlotte softball achieved its first national ranking in program history. Wike’s coaching and leadership has played a key role in the development of many Charlotte student-athletes. During her time at Charlotte, Bailey Vannoy has been twice named Conference USA Player of the Year, making her the first Charlotte softball athlete to bring home such honors. Vannoy was also named a Second Team All-America by the National Fastpitch Coaches Association, making her the first all-American in program history.

The Alexander Central alum commented “To say I’m grateful for this promotion would be an understatement, I am extremely thankful for Ashley believing in me and continuing to help me elevate myself as a coach. Three years ago we set a vision for this program and we have only scratched the surface of that vision. We will continue to raise the bar and elevate this program on a national level. Being in Charlotte and building a program in my home state is something I take great pride in. I am very excited to help bring a championship to Charlotte as the associate head coach”.