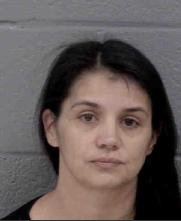 40-year old Daphne Regina Walsh of Taylorsville has been charged with a series of crimes including felony identity theft.

In February, an investigation began by the Iredell County Sheriff’s Office involving State Unemployment Benefits. A person attempted to file for unemployment but was unable to do so because their personal identifying information had been used and a claim had already been filed.

It was determined that Walsh was the suspect according to a news release from the Iredell Sheriff’s Office. Walsh was taken into custody by the Taylorsville Police Department for felony identity theft. She initially was placed in the Alexander County Detention Center with a secured bond of $76,000. Multiple other charges were filed from other agencies as well.