A Statesville man is in custody following a two county chase overnight.

The Taylorsville Police Department has released the following

Monday at 11:46 PM Taylorsville Police Officer T.J. Osorio witnessed a cruiser style motorcycle without a North Carolina Registration Plate as it turned onto Adams Pond Road from NC Hwy 90 East. The motorcycle then turned onto US-64 East. As it did so, it quickly accelerated and was estimated at speeds of 80 mph in a 55 mph zone. Osorio activated his blue lights, the motorcycle continued. The Officer activated the siren as well . The Driver (later identified as Devin Lee Bates) then downshifted and began to flee from Ptl. Osorio.

The suspect turned onto Old Mountain Road with Officer Osorio in pursuit. K-9 Sgt. C. Weitzel and Deputy J. Patrick with Alexander County Sheriffs Office entered into the pursuit as well. The motorcycle then turned onto Old Concord Church Road. Speeds reached over 80mph again, until the motorcycle turned north on Mt. Wesley Church Road running the stop sign, then left onto Middle Road. The suspect continued to flee as he turned left on Paul Payne Store Road running that stop sign as well. On Paul Payne Store Road speeds again reached over 80 mph in a 45 zone.

Sgt Z. Stevenson then joined the pursuit as it entered Iredell County. The suspect continued to flee being even more reckless entering on-coming lanes of travel. Sgt. Stevenson became the primary pursuit officer, Stevenson, K-9 Sgt. C. Weitzel and Ptl. T.J. Osorio tried to perform a running road block to slow the motorcycle and end the pursuit safely. At this point the suspect ditched the bike and fled on foot. Devin then turned down a long driveway across from Cornerstone Lane and went into a field behind off Sharon School Road.

Alexander County Sheriff’s Office K-9 Sgt. C. Weitzel with K-9 Officer Bane at this point tracked the subject through rough terrain. As they continued to track Devin, Lt. K-9 T. Simms with Alexander County Sheriffs Office along with North Carolina State Highway Patrol, located Devin in the driveway of 1163 Sharon School Road where he was arrested without incident.

The home owners told officers the suspect had just broken into their residence and asked to be hidden because he was “on the run.” 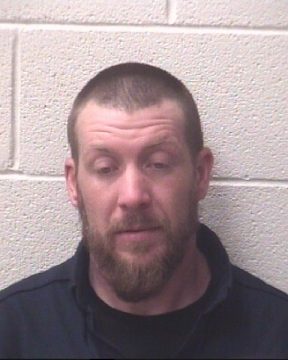 A female passenger on the motorcycle was detained and released.