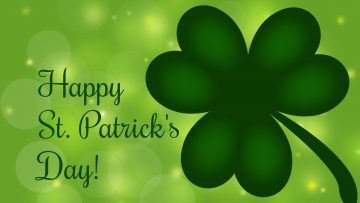 Happy Saint Patrick’s Day ! Let the Irish shine in all of us

1941: The National Gallery of Art opens in Washington, DC

1966: A U.S. submarine found a missing H-bomb in the Mediterranean off of Spain

1969: Golda Meir was sworn in as the fourth premier of Israel

1992: A referendum to end apartheid in South Africa is passed

2010: The National Basketball Association Board of Governors approve Michael Jordan’s bid to but the Charlotte Bobcats. He would change the name back to the Hornets

Our southern border is in total turmoil https://www.nbcnews.com/politics/immigration/southwest-border-crossings-pace-highest-levels-20-years-biden-admin-n1261192

I forgot to wear green today for St Patrick’s Day. If you pinch me, make it hurt !

Quote of the Day: “In individuals, insanity is rare; but in groups, parties, nations and epochs, it is the rule”… Friedrich Nietzsche