1620: The Mayflower reached Provincetown, MA. The ship discharged the Pilgrims at Plymouth, MA, on December 26th

1783: The first successful flight was made in a hot air balloon. The pilots, Francois Pilatre de Rosier and Francois Laurent, Marquis d’Arlandes, flew for 25 minutes and 5½ miles over Paris

1922: Rebecca L. Felton of Georgia was sworn in as the first woman to serve as a member of the U.S. Senate

1973: President Nixon’s attorney, J. Fred Buzhardt, announced the presence of an 18½-minute gap in one of the White House tape recordings related to the Watergate case

1980: An estimated 83 million viewers tuned in to find out “who shot J.R.” on the CBS prime-time soap opera Dallas. Kristin, played by Mary Crosby was the character that fired the gun

1993: The House voted against making the District of Columbia the 51st state

In the News: Murder overnight in Catawba County, man in custody…Pedestrian killed in Wilkes County…Smash and grab in Bethlehem…Lenoir man arrested by Taylorsville Police…Hiddenite man facing upwards of 60 charges…Hickory Police searching for suspects

As I’m writing this, it’s 19 degrees in Taylorsville ! 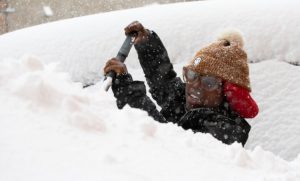 Quote of the Day: “Those who can make you believe absurdities can make you commit atrocities”…Voltaire (Born this day in 1694)