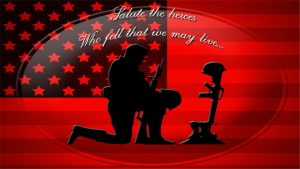 It’s Memorial Day. Let remember those who gave their life to make us free

1848: The Treaty of Guadalupe Hidalgo between US and Mexico comes into force, giving New Mexico, California and parts of Nevada, Utah, Arizona and Colorado to the US in return for $15 million

1922: The Lincoln Memorial is dedicated

1958: The remains of two unidentified American servicemen, killed in action during World War II and the Korean War are buried at the Tomb of the Unknown Soldier in Arlington National Cemetery

1986: Barry Bonds makes his MLB debut for the Pittsburgh Pirates

Weather: Tons of Sun for Monday

Thanks Joe, Beef, Chicken, and Pork prices are the highest ever https://finance.yahoo.com/news/surging-meat-prices-push-summer-164025167.html

Quote of the Day: “Comedy is simply a funny way of being serious”…Peter Ustinov