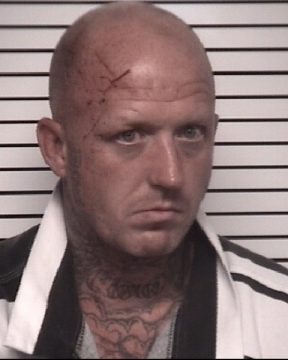 Emmitt Steven Loges, 33, of Taylorsville was arrested by Iredell County Sheriff’s Deputies on Wednesday, June 16th. A deputy patrolling in western Iredell County in the the area of Lookout Dam Road and Island Ford Road noticed a motorcycle on the side of the road near a “No Trespassing” sign.

The officer ran the registration plate. It was quickly determined the tag was registered to a different motorcycle and entered as stolen by the Lenoir Police Department.

A man was located nearby who claimed the motorcycle before fleeing on foot into a wooded areas. A search was conducted. A driver’s license was found that matched the description of the suspect identified as 33-year old Emmitt Steven Loges of Taylorsville. Multiple felony warrants were pending in Iredell, and Alexander Counties.

Iredell County Sheriff’s Office Canine “Sadie” was deployed in an attempt to locate the suspect. A track was quickly detected leading to the arrest of Loges.

The suspect is being held without bond in the Iredell County Detention Center.