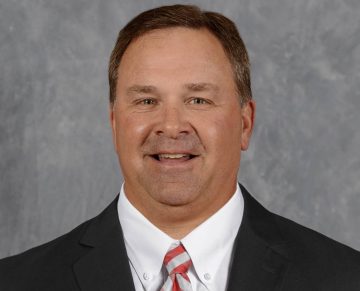 TULSA, Okla. –– The University of Tulsa confirmed Monday night that Ohio State offensive coordinator Kevin Wilson will be introduced Tuesday as the school’s 34th head football coach. A news conference is set for 3:00 p.m. and will be carried live on ESPN+ and livestreamed at TulsaHurricane.com.

Wilson, a native of Maiden has 31 years of coordinator experience, has directed some of the most innovative and prolific offenses in the nation over his 37-year collegiate coaching career. He comes to Tulsa following six seasons as the Buckeyes’ offensive coordinator and tight ends coach.

Before that, Wilson spent six years as the Indiana University head coach. He has also coached at Oklahoma, Northwestern, Miami (Ohio), North Carolina A&T, Winston Salem and North Carolina as a graduate assistant.

Wilson has coached in four national championship games and has been a part of 13 seasons with 10 or more wins.

At Ohio State, he was a part of four consecutive Big Ten championships plus a Cotton Bowl win over USC in 2018, a Rose Bowl win over Washington in 2019, advanced to the College Football Playoffs in 2020 and defeated Clemson in the 2021 CFP Semifinals to advance to the CFP championship game.

Wilson attended Maiden High School. He and his wife, Angela are the parents of five children: daughters Elaina, Makenzie and Marlee, and sons Trey and Toby.