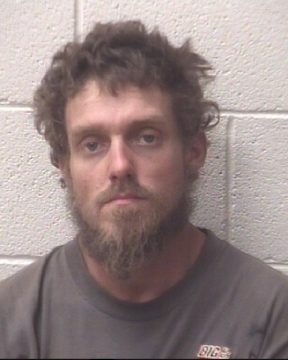 32-year old Chadbourne Lee Dillard of Hiddenite was arrested Friday by the Alexander County Sheriff’s Office. He was served an arrest warrant after missing a court date for failure to appear and was also charged with resisting a public officer. Dillard is being held in the Alexander County Detention with a secured bond of $2,200 with a March 28th court date scheduled in Taylorsville.

On Monday, Sheriff Chris Bowman released the following information regarding this story that was first published on Saturday, March 5th.

On Thursday, March 3, 2022, officers with the Alexander County Sheriff’s Office were called to an address on Kennington Lane in the Hiddenite Community of Alexander County near the Iredell County Line in reference to a civil dispute. Upon arrival, officers received information that Chadbourne Lee Dillard, age 32 of Hiddenite, had made threats against his neighbors and law enforcement. Dillard was known to be carrying a firearm. It was also discovered he had an active Fail to Appear warrant for a traffic offense from Iredell County from December of 2021. The suspect fled on foot into a wooded area upon officers’ arrival.

On Friday, March 4th, officers with the Alexander County Sheriff’s Office, including the K-9 Unit and Drone Unit, responded back to the address on Kennington Lane in an attempt to locate Dillard. The drone unit was deployed. The technology spotted Dillard in a wooded area behind his residence near a makeshift campsite. Dillard fled on foot as officers approached. Deputies continued to search the wooded area and located Dillard hiding in an outbuilding near Liles Lane.

Dillard was arrested, served with his active warrants, and additionally charged with Resisting Arrest. He was transported to the Alexander County Law Enforcement Center, where he was placed under a $2,200 secured bond.

Sheriff Bowman would like to recognize the Alexander County Sheriff’s K-9 Unit and Drone Unit for their assistance in the apprehension of Dillard.