Hickory, NC– Lenoir-Rhyne announced this week a major renovation of the Helen and Leonard Moretz Stadium, home to football and men’s and women’s lacrosse.

Called the Centennial Campaign for Moretz Stadium, the $15 million renovation will touch every aspect of the stadium. Improvements will include new and enhanced grandstands, new entrances on the west and east sides, new concession stands and restrooms, new video boards and a new press box. In addition, there will be eight luxury suites and a club VIP seating area, making Moretz Stadium one of the few Division II schools with suites and club seating.

“This will be the first major renovation to Moretz Stadium since 1964 and will significantly improve the game-day experience for our student-athletes and fans,” said Kim Pate, vice president for athletics. “This bold plan aligns with our strategic plan for athletics that calls for enhancing our facilities over the next decade.”

Fundraising to support this initiative is already underway. Thanks to early commitments from private donors, more than $8 million has already been committed to the project, including a lead gift from Marilyn and John Moretz. In honor of their gift, LR will name its entire athletic campus, which comprises six key sporting venues, the Moretz Sports Athletic Campus.

“We are incredibly grateful to Marilyn and John Moretz for their generous support of this project,” said Pate. “The Moretz family has a long history with LR, and their support has been instrumental in positioning the athletic program and the overall University for success well into the future.” 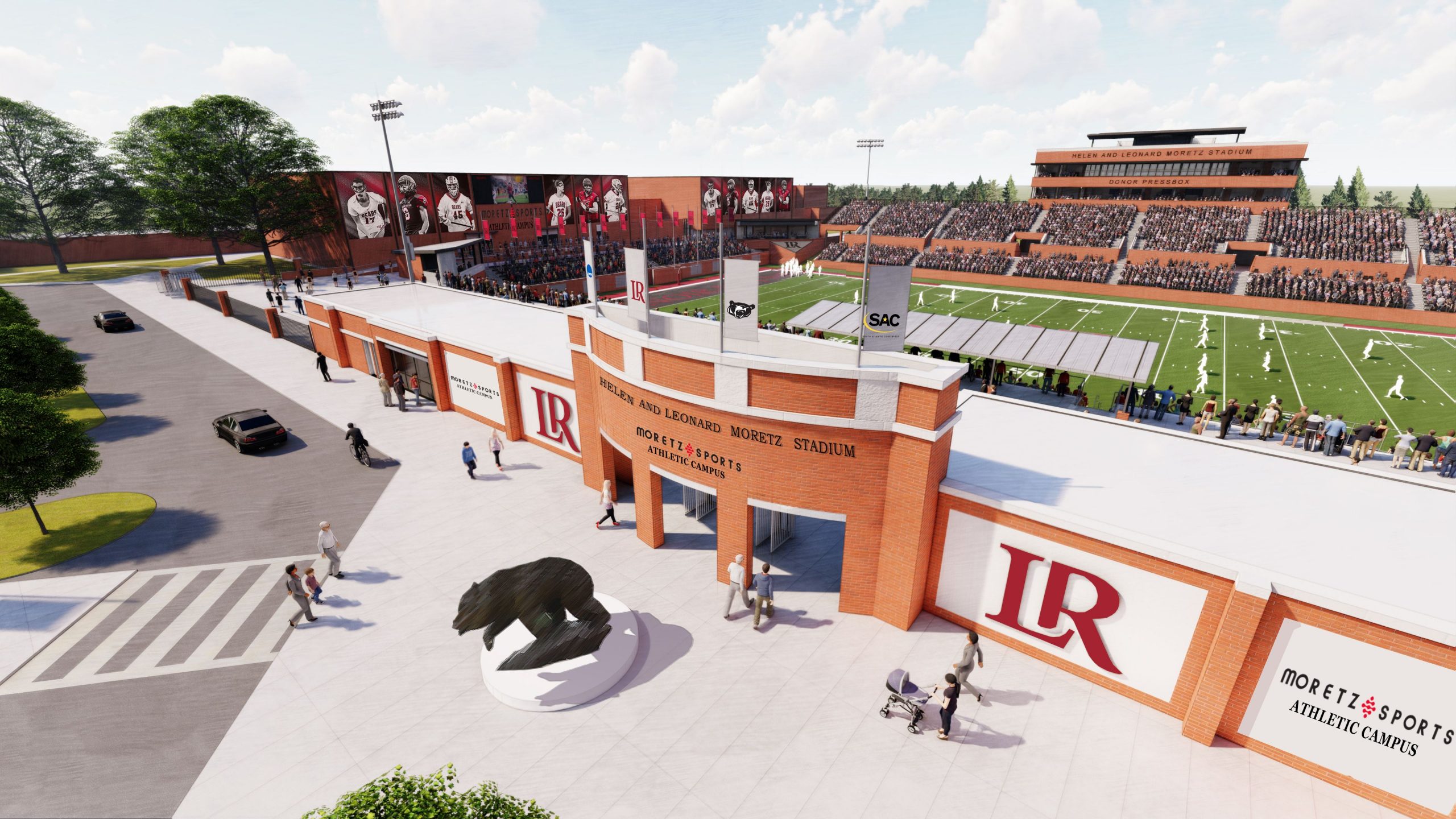 Construction will begin immediately following the fall 2021 football season with the majority of the project expected to be completed before the 2022 football season. Key components of the renovation include:
New home grandstands on the west side with wider rows and the option of seatbacks
Renovation of the east side and end-zone bleachers to bring the total seating capacity to 8,200 with the option to expand beyond 10,000 in the future.
New press box and President’s Box
New grand entrance on the east side, which will include a spacious plaza and covered viewing area
New restrooms, concession areas, apparel store, and ticket booths to better meet fan expectations
New fieldhouse that will include locker rooms and lounge space for the men’s and women’s lacrosse teams
New video boards and sound system
Addition of a team tunnel to improve field access, crowd flow and enhance the game-day experience
VIP luxury suites and covered club seating area
Walk of Champions connecting the Moretz Sports Athletic Campus venues
New wrought iron fencing with brick columns surrounding the venue
Lighting upgrades to better facilitate web streaming and televised productions
Enhanced branding to showcase LR school spirit
ADA-accessible seating, press box elevator and paved tailgate entrance

“This renovation will allow LR to provide nationally competitive facilities for our Division II athletics program, aid in recruitment of student-athletes, and enhance LR’s position as a university recognized for both its academic and athletic success,” said Dr. Fred Whitt, University president.

More information on the project can be found at lr.edu/moretzstadium.

Facts About Moretz Stadium
Moretz Stadium has been home to LR football since 1924, making it the fourth-oldest stadium in Division II.
It was named for Helen and Leonard Moretz in 1989.
The brick walls in the stadium have given rise to the phrase “Between the Bricks” when referring to LR football.
Attendance for LR football games averages more than 5,000 fans.
The stadium became home to men’s and women’s lacrosse in 2011.
LR celebrated 100 years of football in 2019.
The stadium has hosted two men’s lacrosse national championship semifinal games and 10 NCAA football playoff games.
In its history, it has hosted countless youth sports camps, band competitions, graduations and community events.